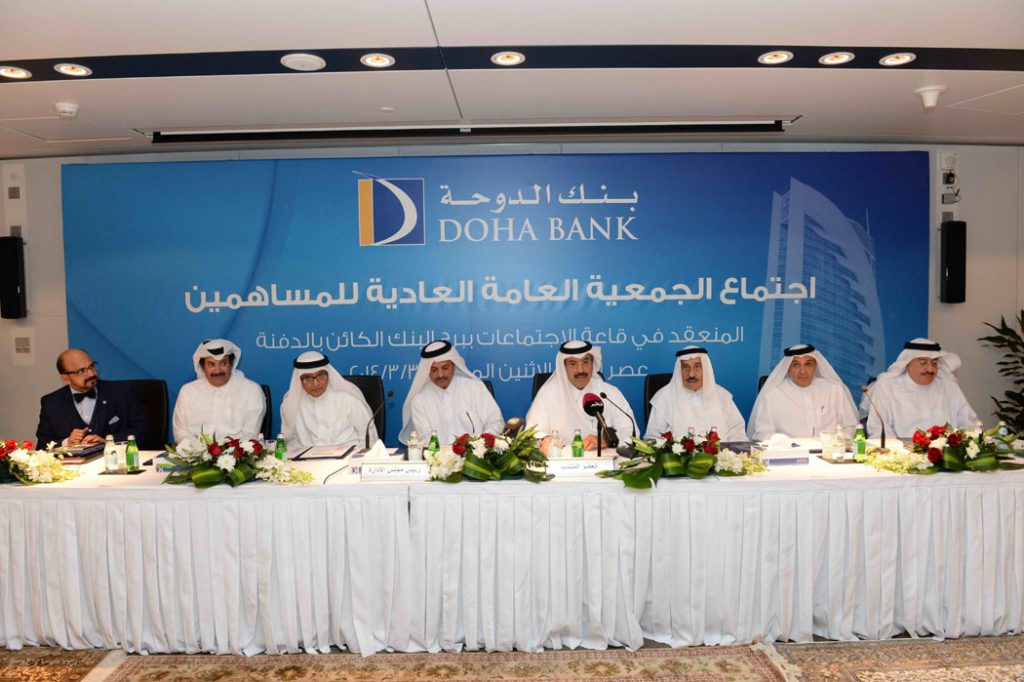 Statement of Chairman of the Board The General Assembly Meeting Held on March 3rd, 2014

On behalf of myself and the members of the Board of Directors (BOD), I would like to thank you all on this occasion for attending this meeting. I also would like to extend my thanks to the BOD and the Executive Management Team for the achievements accomplished during the year 2013 in the midst of fierce competition in the market and the challenges and difficulties faced by capital markets worldwide.

As you are all aware, the challenges faced by capital markets still linger on, and the economies of European Union countries are still facing great difficulties other than the political events experienced in the Middle East which led to a slowdown of the economies of various countries across the Globe including the economies of the developed countries forcing some of those countries to make economical reforms to exit from the crisis.

Despite of all these events and due to the wise leadership of His Highness, Sheikh Tamim Bin Hamad Al-Thani, The Emir of Qatar, and the strength and durability of Qatar’s economy, in addition to Qatar being the hosting nation for the FIFA World Cup in the year 2022, we are still optimistic about the future where we anticipate that Qatar will witness exceptional boom in all economic sectors with subsequent launching of many development projects in the coming years that will reflect positively on the performance of the banking industry in Qatar in general and of Doha Bank in particular.

By the end of year 2013, we achieved extraordinary growth rates in all financial indicators. The total assets rose by 21.3% reaching to QR 67 billion, total portfolio of loans and advances rose by 21.7%, total customers’ deposits rose by 23.6% and the total shareholders’ equity rose by 49.3% reaching to QR 11.3 billion. We also achieved a growth rate of 0.6% in net profit whereas the net profit achieved by the end of the year was QR 1,313 million compared to QR 1,305 million in 2012 in addition to a growth rate equivalent to 5% in total operational income. These robust results were reflected in strong performance ratios particularly the return on average shareholders’ equity and the return on average assets which were 17.9% and 2.18% respectively.

In the same year, we approved bank’s three-year strategic plan and incorporated some amendments on the bank’s business strategy especially with regards to the activities of overseas branches and representative offices. The future plan of the bank includes implementation of an effective Risk Management strategy at both the local and international levels, recruiting Qatari nationals, enhancing the levels of staff performance by recruiting highly experienced and qualified human resources, improving banking services delivery channels, upgrading the level of Corporate Governance in the bank, diversifying its income sources and strengthening its financial position with a view to achieving the highest level of effective operational performance.

In order to achieve bank’s strategic goals at the local, regional and international levels, and strengthening bank’s lending capacity, improve its competitive edge and achieving the highest levels of performance, we had, at the end of last December, implemented the resolution of the Extraordinary General Assembly of the Shareholders which was issued on 24/11/2013 by issuing Tier 1 Capital instruments amounting to QAR 2 billion qualifying as additional Tier 1 Capital as per the terms and requirements of Qatar Central Bank. At the end of Q1 2013, Doha Bank had successfully completed raising its capital to 258 million shares through a rights issue equivalent to 51.7 million shares. The issue generated an overwhelming response and the new shares were listed at Qatar Exchange on April 8, 2013.

Many thanks and appreciation to all the shareholders, customers for their confidence in the bank and to the Executive Management and all the staff of the bank for their continuous cooperation and efforts which led to achieving impressive results for Doha Bank.

The Resolutions of the General Assembly Meeting of the Shareholders

H.E. Sheikh Fahad Bin Mohammad Bin Jabor Al-Thani, Chairman of Doha Bank, announced that the Ordinary General Assembly of the Shareholders in its meeting held on 03 March 2014, approved the balance sheet and profit & loss account for the financial year ended on 31/12/2013 and also approved the Board’s recommendation to distribute cash dividends of QR 4.5 per share to the shareholders. During the same meeting, H.E. the Chairman and Board members were discharged from the responsibility for the year 2013 and their remunerations were determined. Ernst & Young was appointed to audit Doha Bank’s accounts for the financial year 2014. His Excellency also stated that the Assembly approved the deals conducted with related companies that were submitted to the Assembly and approved the acquisition of one or more branches of a foreign bank operating in India (to utilize the license obtained by Doha bank from the competent Indian authorities to practice banking activities there) and authorizing the Board of Directors and those authorized by the Board to negotiate the terms of the Sale and Purchase Agreement and to take necessary actions to execute this resolution and sign the required contracts and documents after obtaining the approval of the competent regulatory authorities. H.E. Sheikh Fahad also said that during the same meeting, the below candidates for the membership of Board of Directors were elected unopposed for the next three-year term, i.e., 2014, 2015 and 2016:

H.E. Sheikh Fahad Bin Mohammad Bin Jabor Al-Thani extended his sincere thanks and gratitude to the Board members and Executive Management for their efforts and achievements during the year and to the shareholders, representatives of the supervisory authorities in the State of Qatar and the auditors and wished them all the success and prosperity.