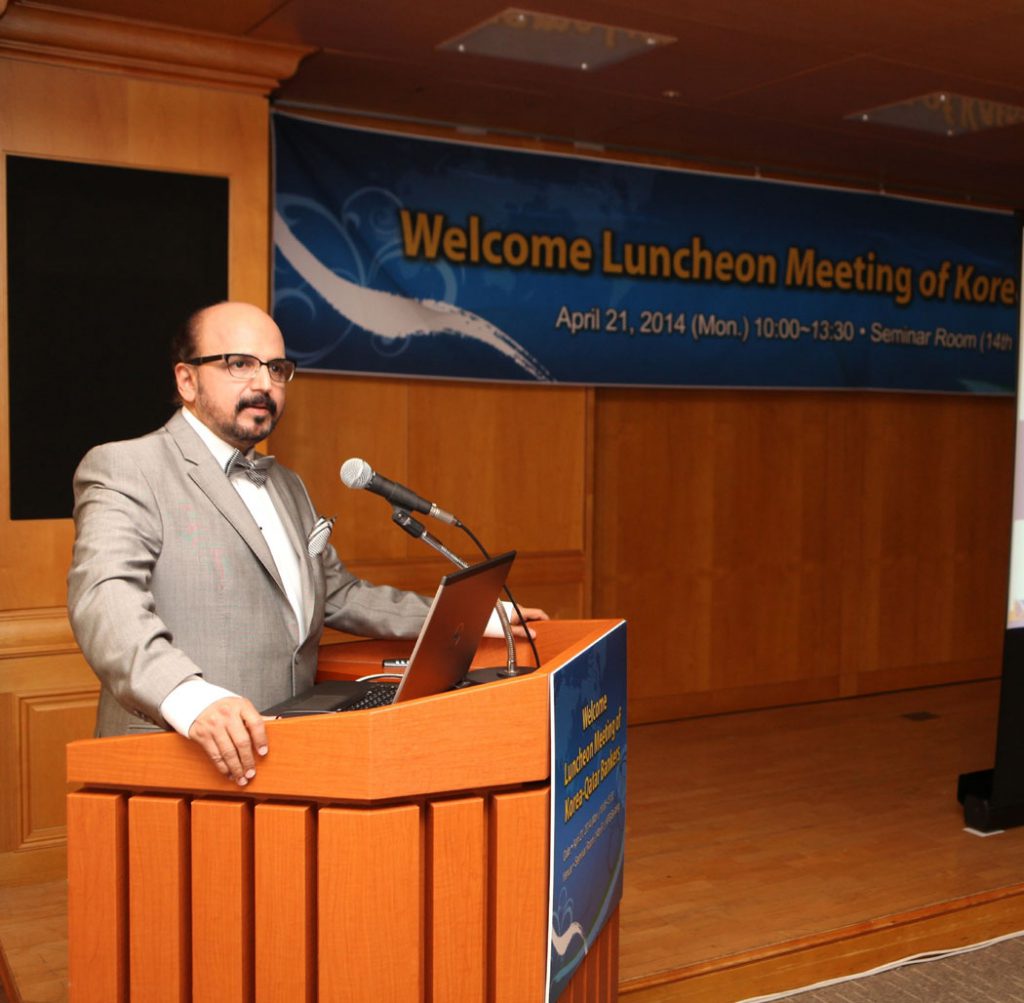 Speaking on the occasion Dr.R.Seetharaman highlighted the bilateral relationships between South Korea and Qatar. He said “2014 is the 40th anniversary of the start of diplomatic relations between Korea and Qatar. Korean imports from Qatar are mainly oil and gas, while exports from Korea are mostly electronics and automobiles. Qatar’s buoyant trade with South Korea has been mainly due to rising export of liquefied natural gas. Qatar supply’s close to 30% of South Korea’s energy requirements. In March 2012 RasGas signed a long-term sale and purchase agreement (SPA) with Kogas. Qatar, through Nakilat and its LNG joint ventures, took delivery of 54 LNG tankers and 4 LPG ships built by South Korean shipyards which are valued at more than $13.5bn.”

Dr. R. Seetharaman gave insights on bilateral relationships between South Korea and Qatar on the non-hydrocarbon sector. He said “In May 2011 Caravan, a Korean company specialized in manufacturing prefab houses signed an MOU with a local company to construct dormitories for foreign workers. In 2011 Korean IT firms have offered government bodies in Qatar state-of-the-art Intelligent Transport System (ITS) to improve Qatar’ s transport industry. Samsung, the IT technology provider for the Korea World Cup 2002, offered their latest technology for the Qatar World Cup 2022. ”

Dr. R. Seetharaman gave insights on Qatar economy. He said “GDP growth could stay around 5.9% in 2014 as the pickup in the public investment program is roughly offset by a modest decline in hydrocarbon output. Public investments are expected to keep growth roughly 6–7% over the medium term, with non-hydrocarbon growth remaining about 10%, double-digit expansion in the non-oil and gas segment is expected in 2014.Qatar’s Budget 2014-15 has planned QR75.6bn on infrastructure development for FIFA world cup. The budget has made allocation for Hamad International Airport, the New Doha Port as well as for the rail, metro and various road projects. Project work is also expected to commence in 7 stadiums. Projects valued at an estimated QR664bn are anticipated to be implemented during the next five years.”

Dr. R. Seetharaman gave insight on opportunities in Qatar. He said “Projects worth more than $72bn is expected to be awarded in Qatar in 2014 out of which transport, water and construction are the major sectors which will witness activity. South Korea has played an important role in the modernisation of Qatar. Qatar is an important Engineering, Procurement and Construction (EPC) market for Korea. Hyundai Heavy Industries was awarded the Barzan Gas Project lump sum engineering, procurement and construction (EPC) contract, which is one of the largest gas project in the region. Korean companies are working in major projects in Qatar, including Lusail Expressway project, Barzan Gas project, Business Network project, electricity and the metro project. In August 2013 Qatar and South Korea signed an MOU for cooperation in the construction sector. Korean companies such as Hyundai, Ultra construction, Samsung C&T, Caravan and Doosan Heavy industries participate in the Qatar construction sector.”