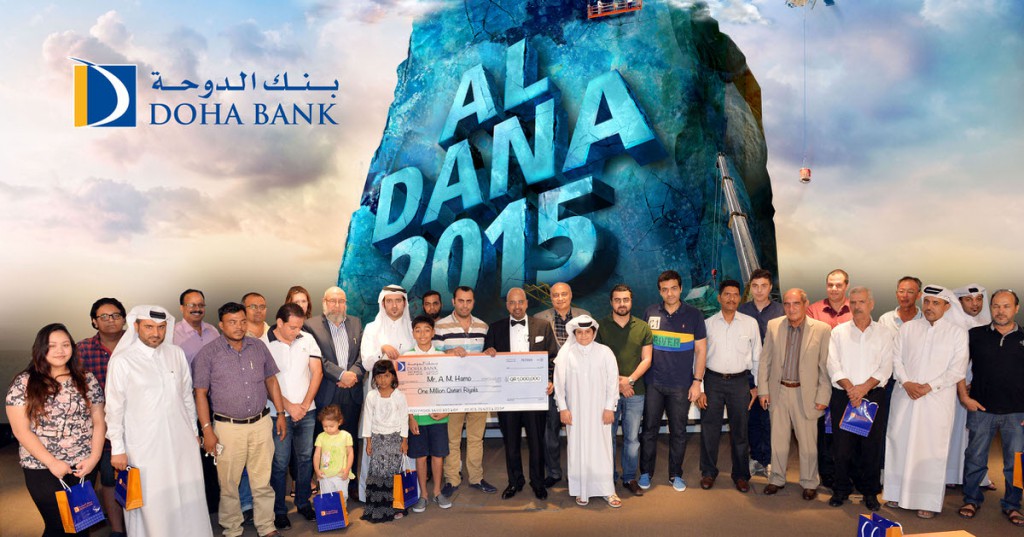 Doha, June 2015: Doha Bank announced the winners of the year’s third and fourth monthly draw for its Al Dana Savings Scheme. The draw held at the bank’s headquarters in West Bay produced a total of 86 winners as Qatar’s leading private bank continued to reward its customers as part of its drive to encourage a savings culture among nationals and residents.

Mr. A.M. Hamo, the winner of the 4th draw QR 1 MILLION, who joined the celebration at Doha Bank headquarters in Dafna received the cash prize and said: “I am glad to be the winner of the Al Dana one million prize this month and gladly invite my friends and family members to save with Al DANA saving scheme from Doha Bank to stand a chance in the upcoming draws.”

In a flashback at the second draw winners Mr. M. I. Ahmed, the winner of the QR 1 million was speechless and said in excitement: “It feels great to be a millionaire, I have been banking with Doha Bank since 2008 and the prize money I have won has certainly changed my life. I plan to continue my education, perhaps start a business after my graduation and help my father with his business in Qatar which he calls his home away from home.”

“For Doha Bank, the Al Dana prize draws represent a means for showing our appreciation to our customers for their continued patronage, at the same time providing a platform for us to drive home the importance of saving to a wider community,” said Dr. R. Seetharaman, Group CEO of Doha Bank. “To those yet to embrace a savings culture, the campaign demonstrates the benefits of saving with Doha Bank and the exciting rewards it could fetch them through the most credible of proof points – the real-life examples of hundreds of customers who find their lives transformed on winning a share of the prize bonanza on offer each year.”

New account holders were not to be left out in the latest draw with Doha Bank introducing a special prize draw for customers in this category that saw 20 new-to-Al Dana customers receive a brand new iPhone 6 each. A further 20 iPhone 6 smartphones were awarded to young savers to recognize their commitment to saving at an early age. The event was attended by the families of the young kids, who added a great delightfulness to the awarding event and enjoyed posing for the camera in anticipation of their first to be featured picture in the press.

Suresh Bajpai, Head of Retail Banking at Doha Bank, said, “With the largest prize pot in the history of the program, this year’s Al Dana campaign ensures that more customers than ever will have a chance to win valuable prizes. The prize draws are based on savings balances, so customers can increase their chances of winning by saving more and contributing often to their Al Dana accounts.”

All prize draws are conducted under the supervision of relevant authorities in Qatar and full lists of the prize winners are published on www.dohabank.com.qa.