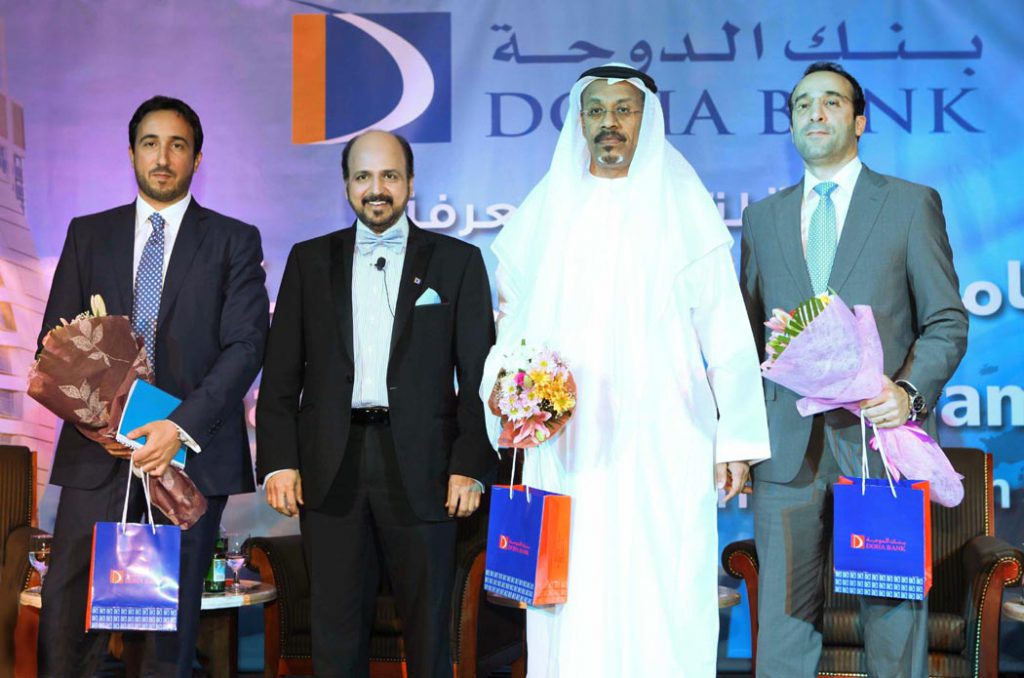 Doha Bank held the International offices Annual Meet on 22 November 2011 at Abu Dhabi in which all the Chief Representatives and Chief Country Managers of its overseas Representative Offices and branches from 11 countries have participated. On this occasion the bank has convened a knowledge sharing session titled “Changing Market Dynamics” at Sheraton Abu Dhabi Hotel & Resorts for its corporate clients who have cross border operations and its key relationships in which the eminent speakers from the industry provided a deep insight and shared their valuable experiences with the guests who attended the meet. The event was well attended by the local and foreign corporates and key relationships of the bank besides the dignitaries from the various foreign country Embassies.

Mr. R.Seetharaman, Doha Bank Group CEO narrated in detail “what is happening in the world” i.e. the current global crisis and its impact on the global economy. He recalled the revised IMF projections on the global growth to about 4 per cent through 2012 from over 5 per cent in 2010 and the real GDP in the advanced economies is projected to expand at an anemic pace of about 1.6 percent in 2011 and 2 percent in 2012. This assumes that the European policymakers contain the crisis in the euro area periphery, that U.S. policymakers strike a judicious balance between support for the economy and medium-term fiscal consolidation and that the volatility in global financial markets does not escalate.

Mr. R.Seetharaman further said “The developed world will come out of recession only when the mighty engine of finance turns to the task of developing a sustainable future. And that faces political, not economic obstacles. The fundamental problem is that the US and Europe have failed to develop vision, strategy or practice that can drive economic growth in the face of the vitality and growing competitive advantages of emerging nations. We witnessed US losing its AAA rating this year and we also saw divergence in monetary and fiscal policy contributing to the current European crisis. US is witnessing deficit problems and the EURO zone has its own problems arising out of Greece, Italy and Spain, the global economic growth depends on Asia and Middle East, the key drivers. These and the ongoing social change in some of the countries in the region make the markets in complete volatility. The countries in the GCC benefited from the high oil prices diversifying their economies and this pave the way for these economies to look beyond the hydro carbon exports and its dependency. Qatar amongst all the GCC countries does well in this front and the Qatar Exchange, the market barometer of the economy is the only stock exchange in the region which is in the positive territory while others are faring negatively. “

Mr. Seetharaman show cased that the changes create opportunities and the people invent strong economies. He pointed out that whether a bank is local or private it is global under the current circumstances and the quality of it product and services matter as the changes are real and imminent. Institutions have to devise its own model to contain cost and to have complete risk integration in a world which is dynamic with connectivity in real order.

Mr. Seetharaman said that the Qatar Credit default Swap rate had gone up due to global tensions. The changes happening in the global arena will create a new world order and Qatar has kept its ground well with its Qatar National Vision 2030 and Qatar National Development Strategy for its continued growth and expansion in the non-hydrocarbon sector in order to have economic prosperity for its subjects.

Also other dignitaries present shared their views on changing market dynamics. His Excellency Mohammed Omar Abdulla, Under Secretary, Department of Economic Development, Abu Dhabi gave his views on regional economic conditions and the opportunities Abu Dhabi and GCC countries offer to rest of the world and appreciated the steps taken by Doha Bank in organizing this session in the interest of the Corporate clients of the region.

Mr. Mario Maratheftis, Head of Research, Europe, Americas, Middle East and South Asia-Standard Chartered Bank gave an insight status and outlook of financial markets and expressed his views on the fiscal problems faced by various European countries and how these economic problems took birth years ago with the introduction of EURO currency for Euro zone countries.

Mr. Hani Deaibes, Head of MENA Debt Capital Markets, JP Morgan Chase shared his views on the impact of crisis on capital markets and changing economic situations affecting the countries across the world.

The session was well attended by Doha Bank staff from UAE and the session turned into a highly interactive session towards the end with question and answers from the audiences to the panel members were raised concerning changing market dynamics and the panel members gave their valuable responses about the same.