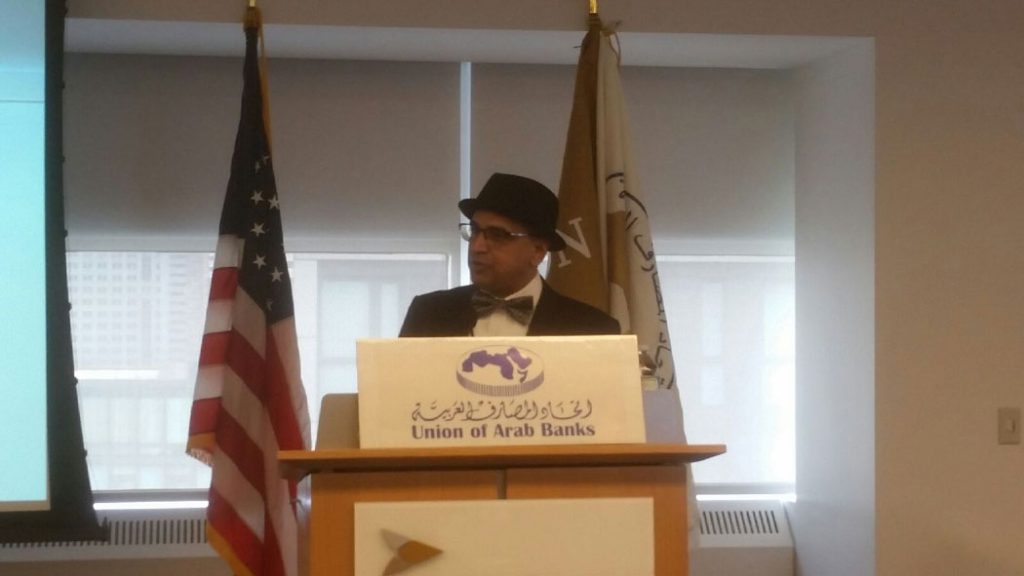 Speaking at the conference Dr. R. Seetharaman gave insight on current trends in correspondent banking. He said “Banks had looked forward to scale their vast correspondent-banking networks to reduce risks and strengthen controls, expand their client coverage and geographic reach by striking up new banking partnerships. However with the onslaught of new financial regulation banks need to reassess and redefine this business. With banking revenues under pressure, many banks are questioning whether they can continue to try to offer all services to all clients in all markets, combined with rising costs related to new regulations. Banks are selectively increased the global banking partnerships.”

Dr. R. Seetharaman highlighted the importance of correspondent banking in Middle East. He said “After crisis letters of credit re-emerged as the key solution for alleviating the spike in credit risk concerns. During the financial crisis, it was correspondent banking which played a pivotal role as many global banks retreated towards their home market, leaving constraints in trade funding and risk mitigation. Local banks became vital, both for local corporates and their international trading partners. When it came to securing the handling of trade flows despite a spike in perceived risks during the crisis local banks proved that their knowledge of local companies was critical to keeping trade flowing.”

Dr. R. Seetharaman gave insight on regulatory focus on correspondent banking. He said “Regulators continue to scrutinise due diligence and risk management practices in the Correspondent Banking arena due to the inherent risks associated with processing transactions as well as cases in which Correspondent Banking accounts have been used to move illicit funds. Recent regulatory actions have resulted in record-breaking financial penalties and have highlighted the vulnerabilities which financial institutions are exposed to when there are failures in in the areas of governance, client due diligence, risk assessment and transaction monitoring.“

Dr. R.Seetharaman gave highlights on recent Financial Crimes, AML lawsuits faced by financial institutions. He said “Certain banks failed to conduct basic due diligence on some of its account holders, assign the appropriate risk categories and ignored warnings that monitoring systems are not adequate. Violation of Know your customer (KYC) norms also exposed them to fraud risks. Certain banks failed to check and monitor the relationships its corporate customers had with politically exposed people. Some banks failed to identify high risk transactions. Financial crimes have increased the penalties for banks and also affected the reputation risks.”

Dr. R. Seetharaman gave insight on areas to focus in an AML program. He said “In order to be successful, AML initiatives cannot be left to business as usual. Senior management must sponsor AML with remediation being driven by governance, structure and process, and with all change being managed by a dedicated capability. The key areas to focus include new account opening procedures, sustained customer identification process, customer risk rating, enhanced due diligence and transaction monitoring and reporting. As cyber crime getting more sophisticated, the onus is on banks and financial institutions to be extra vigilant on web based transactions. Globalisation is breaking down of barriers with regard to exchange control and more sophisticated avenues of investments like derivatives and mutual funds, tracking suspicious transactions is bound to become more challenging, bankers need to be more diligent and vigilant.”